What initially drew you to Portacool? 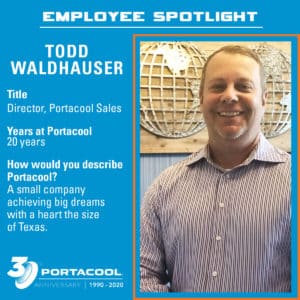 I wanted to experience an outside sales role and be able to have more control over my destiny with a small company that was preparing to expand and could provide an opportunity to grow together. I first applied for the Florida, South Alabama, South Georgia position with the company, which was at the time called General Shelters, Portacool division, but was not offered the job. Eight months later I got a call back from then CEO Bill Lloyd asking if I still had interest in the job. I expressed interest even though I had taken a promotion at my current company. The position was for the Atlantic district based out of Atlanta, so I accepted the job, packed up and headed north.

Portacool has seen continual growth during my time from sales, customer service, marketing, production and logistics. From five salespeople to more than twenty around the world, one small cramped conference room to four spacious idea and solution rooms, and resources to conquer any challenge. The biggest change has been the level of talent the company has in place, develops and continues to attract – we get better every day.

What is your favorite thing about working at Portacool?

It has always been our team. From day one to today, the Portacool family has been a consistent blessing to be a part of and in which to have a personal stake.Additionally, to provide a product that supports so many markets and affects people’s lives, especially with the military, is humbling. As an example, I was walking through an airport and a random person stopped me and asked if I worked for Portacool. Having my company logo shirt on I said yes not knowing what was going to be said next. He said, “you guys saved my life, if it wasn’t for those over in Afghanistan, I would never have made it.”  That’s impactful for anyone to say to you.

From your perspective, what would you say are Portacool’s greatest accomplishments over the years?

There have been so many accomplishments and milestones reached but overall, the growth, service, and market share of the company from both our cooler and media divisions are to be applauded.

How would you describe Portacool?

A small company achieving big dreams with a heart the size of Texas.