Cooling on a Global Scale

Global temperatures have been rising steadily for a long time, but the rate of increase over the past few decades has been particularly high. In fact, the World Meteorological Organization listed the year 2020 as the second warmest on record, rivalling 2016 for the top spot. According to the European Environment Agency, the global mean near-surface temperature during the last decade (2010-2019) was 0.94 to 1.03 °C warmer than the pre-industrial level, which makes it the warmest decade on record. In addition, European land temperatures have increased even faster over the same period, by 1.7 to 1.9 °C, meaning Europe is warming more quickly than the global average.

Aside from the obvious discomfort, extreme heat can have a direct impact on health. The European Climate and Health Observatory projects increased average temperatures and heat waves are likely to have serious implications on public health in the coming years. Exposure to high temperatures causes health-related issues ranging from dehydration to heat stress to worsening existing chronic conditions and even death. While removing yourself from the hot environment may seem like a simple solution, some groups of people are unable to avoid challenging temperatures and working conditions.

Many workers – either outdoors or in specific industries, such as manufacturing – are exposed to challenging work environments every day. A mix of high temperatures, building structure, and heat-generating machinery can have a huge impact on workers. According to preliminary research from the HEAT-SHIELD project, workers engaged in manual tasks and required to wear protective clothing are especially affected by heat during a large part of the year (from one-third to half of the year), with fatigue, thirst, and high head temperatures as the most frequent issues or symptoms reported. While many workers push through these types of symptoms, dehydration and heat stress can lead to dizziness, fatigue, concentration problems, and in some instances, loss of productivity. 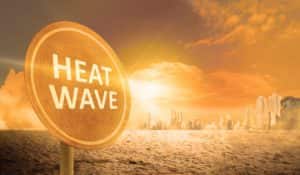 High temperatures are not decreasing, at least not at this time, and difficult working conditions are sometimes unavoidable. So how can employers ensure that workers are getting the cooling they need to be safe, productive, and comfortable? Aside from the standard practice of providing rest breaks and access to water, consider Portacool portable evaporative coolers to provide cool relief to workers.

In contrast to traditional fans that tend to blow around warm, stagnant air, Portacool portable evaporative coolers work with water, ambient air, and the standard electricity of a household appliance to provide cool air. They are available in a range of sizes, with options that are great for spot-cooling near particularly hot areas, setting up a cooling station for rest breaks, or cooling a full building. All Portacool evaporative coolers come equipped with Kuul evaporative media, the highest quality media available on the market and specifically engineered for Portacool products.

While Portacool, LLC is based in Center, TX, the company has a global presence in order to best serve customers around the world. While all Portacool evaporative coolers are proudly made in the U.S., inventory is stored in off-site warehouses in Wilmer, Texas and Rotterdam, The Netherlands. Local, live customer service is based in The Netherlands to respond directly to European customer needs, and we have sales team members specifically dedicated to the European market.