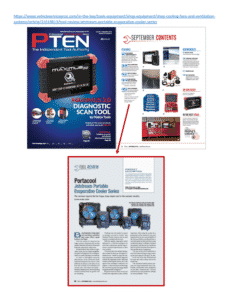 Over the course of a long, hot Las Vegas summer, Hoyland tried out the smaller unit in Portacool’s evaporative cooler series — the JS230.

Hoyland reports that, although an evaporative cooler can be a fairly straightforward piece of equipment, it can make a big impact on business.

In order to thoroughly assess the effectiveness of the Portacool JS230, Hoyland transported the unit to a few different locations at his shop to see how well it would cool workspaces of various sizes. The setup was quick – Hoyland simply had to remove packing material and add water to get the cool air circulating.

“Packing was very sturdy to ensure no damage occurred in transit,” he adds.

The evaporative cooler did not come with accessories; however, an easy-to-read manual was included with the unit.

With the smaller evaporative cooler stationed in a 1,200-foot workspace, he and other technicians quickly experienced a marked improvement in their own comfort.

“On several days, the ambient temperature outside the shop was 110 degrees F,” Hoyland says. “Inside the shop, the daytime temperature exceeded 95 degrees F without the evaporative cooler. Within 60 minutes of turning the unit on, the 1,200 square foot workspace reduced to 85 degrees F. After two hours and through the rest of the day, the shop temp stayed at approximately 78 degrees F.”

Hoyland could not think of any way in which the evaporative cooler could be improved.

After using the cooler for a good portion of the summer, he was most impressed by the size and portability of the Portacool Jetstream JS230, as it allowed him to move the louvers to where air flow is most needed at his shop. In addition, Hoyland was pleased with the fact he would not have to sacrifice precious floor space to this valuable piece of equipment.

“The size of the unit is sufficient to work well without being so large it takes up too much space in the shop,” he says.

At the end of the day, Hoyland and his team were able to keep cool in the Las Vegas heat.