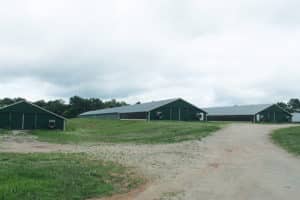 Jeffrey Smith, owner of JX3 Farms in Heflin, Alabama, was raised in the poultry business. His grandfather and father both had poultry houses, and they taught him everything they knew. With the expertise of generations passed down to him, Jeffrey is well-versed in farm operations and knows what works. That is why he chose to use Kuul evaporative media to keep his broilers cool and comfortable.

In 2008, Jeffrey began using Kuul Vitality with DuraPro™ evaporative media. Since then, Jeffrey has seen improved airflow which ultimately results in less power use and more wind speed, both critical to the daily functions of his farm.

“We need cooling capacity to be at its best performance, and if we can’t get enough wind speed and coolness then we lose birds,” Jeffrey stated. Keeping his poultry healthy is essential to his business, as the higher the mortality rate the less revenue the farm profits. The chickens at Jeffrey’s farm need to be maintained at 85 degrees, a difficult task in a location like Alabama. However, the scorching Alabama summers have proven to be no challenge for Kuul Vitality with DuraPro evaporative media.

Jeffrey also stresses the importance of maintaining his Kuul evaporative media so it can perform at the highest degree and last for years. His personal technique for cleaning them is soaking them in a vinegar wash overnight while they circulate with no fans running, and then washing them with a full flood water hose the next day.

After 12 years of using Kuul evaporative media, Jeffrey says he would definitely recommend it to others for performance and longevity.