Two hours northwest of Austin rests the small town of Brady, Texas. Geographically, Brady, which the locals refer to as “The Heart of Texas,” is the closest city to center of the Lone Star State. In August 1941, Curtis Field was opened three miles from Brady. On January 1, 1942, the facility was commandeered by the United States Army Air Forces and was used as a primary pilot training airfield during World War II. The military relinquished control of the airport in February 1945. 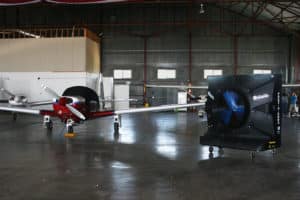 fields occupy 506 acres. The complex is comprised of two large 100’x140’ hangars, two medium 100’x100’ hangars and 10 t-hangars that house 58 planes. With temperatures that average in the lower to mid-90s during the summer months and highs that can spike into the triple digits, the 14 hangars can get HOT!

Joe Mosier, the 16-year airport manager, knows just how hot the metal buildings can get. The most obvious solution would be a large overhead fan, but often these options only push the stifling air from high in the hangar’s ceiling to the floor. There is airflow, but it is hot air!

Mosier needed a solution to protect himself and his staff from the unrelenting central-Texas heat – one that was not only cost effective, but also practical for the open-area hangar and could deliver cool air versus moving hot air.

Before taking over as the Curtis Field Airport Manager, Mosier had held the same position at Sharpe Field Airport in Carthage, Texas. While there, Mosier had been introduced to a product he thought could solve his problem – a Portacool portable evaporative cooler.

“I remember the first Portacool we had in Carthage,” Mosier said. “The thing would cool like nothing else, but HEAVY! And forget about moving the big metal thing. The old ones did not have casters that swiveled.”

Despite that, Mosier knew the company’s reputation in the portable evaporative cooling industry. When the United States Army did a training at Curtis Field and left a slightly damaged Portacool evaporative cooler, Mosier took matters into his own hands. All the abandoned evaporative cooler needed was a new pump, which Mosier easily replaced.

“Everyone was in love with the thing,” Mosier said. “We kept borrowing the ones the Army left and would just replace the pumps. That was a problem in some of the older models – the pumps would burn up if you let the water run out. It was easy enough to fix that though!” Curtis Field no longer uses hand-me-down Portacool evaporative coolers. Several months ago they purchased their very own Portacool Hurricane™ 3600 and Mosier could not be more pleased.

“We just love our Portacool and so do our visitors. Customer service is a big part of what we do here and being able to provide a comfortable environment to our visitors in the summer months is great.”

Mosier says by offering a clean, cool facility they see many repeat visitors. Including the many visitors they get during the Armed Forces Day Celebration and Fly-In they host each year. He says coming to airports are just like anything else, if the facility is clean, neat and comfortable visitors make note of it and will come back. If the facility is otherwise, visitors will note that as well and not return.