Dan and Hollie McNeely live in an airpark in northeast Texas – a neighborhood specifically developed around an airstrip. Most of the 80 houses in the airpark have a private airplane hangar located in the backyard.

Dan spends many hours in his personal airplane hangar – working on planes, relaxing with friends, planning trips and much more. As well as working on his planes, Dan loves restoring and driving 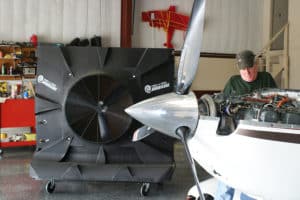 vintage cars.During the summer, however, the sweltering conditions in his hangar often interfered with his activities and kept his wife and friends completely out of the hangar.

“The heat doesn’t bother Dan too much,” Hollie said. “I just cannot take it for very long though. I hated not being out there with him, but it was much too hot and humid for me to stay for more than short periods.

Dan needed a quick fix to reclaim his hangar from the heat – one that was not only cost effective – but also practical for the open-area hangar. 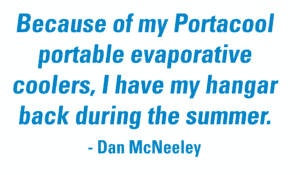 Since his purchase, Dan is much more comfortable outside during the warm months. Not only can the evaporative coolers easily be moved to cool exactly where needed – from the hangar to his garage or to the back porch for a special night on the patio – they can drop the overall temperature in Dan’s hangar as much as 30 degrees F.

Dan has been so pleased with his Portacool evaporative coolers that he now has two of the newer models offered – a Portacool Hurricane™ 3600 and a Portacool Jetstream™ 2400.