Jim Dunn has been racing since his teens. At 84 years young, he hasn’t slowed down. He has created a solid team to focus on NHRA Championship Drag Racing. That team includes three generations of hard workers and a capable crew with driver Jim Campbell at the wheel. In 2018, the team took to the road to compete in 24 races across the country.

With the ability to go up to 330 mph in mere seconds, the Dunn team takes an all-hands-on-deck approach to putting their best Funny Car racing wheels forward – from the qualifying to the final round of races.

So what does it take to get the car ready? Here’s a quick look behind the scenes.

Each NHRA race typically requires multiple runs. The first two days of each race, Friday and Saturday, entail multiple qualifying runs. Then on Sunday, if the team is 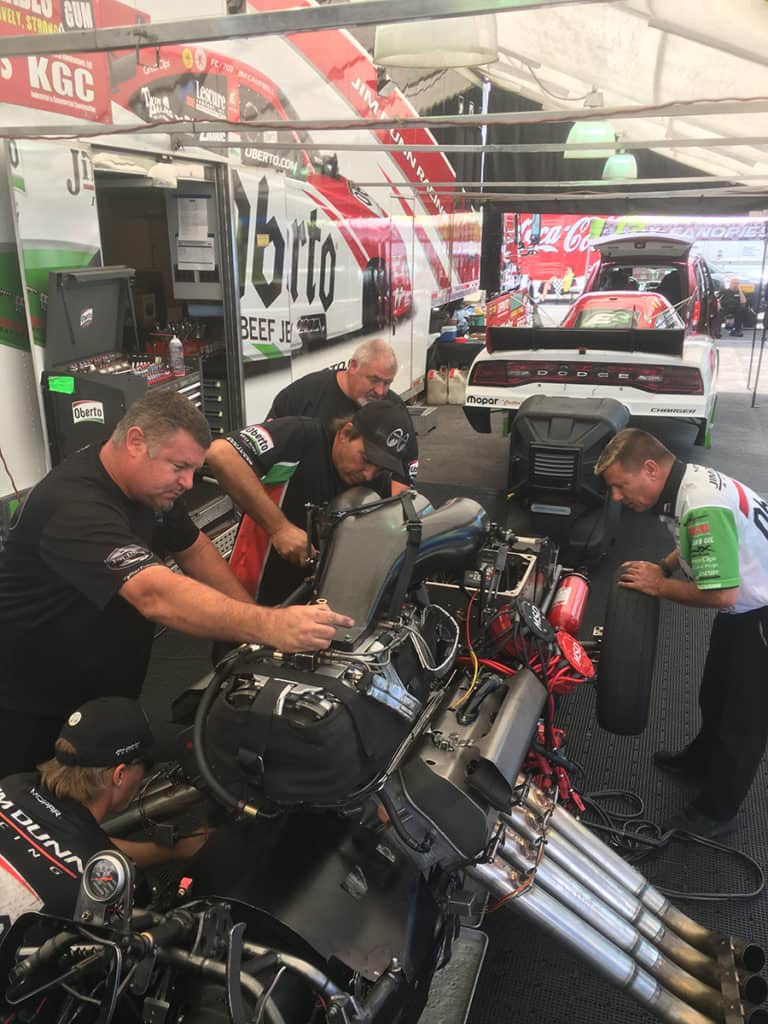 winning, they could run the car up to an additional four times during elimination rounds. After each run, the car gets new rods and pistons. That means the crew is working to install those between races, not to mention all the other engine maintenance necessary to keep the car in tip-top racing shape. This work takes place in the pit area, under an awning, alongside the team’s 53-foot-long, double-decker transporter that hauls two cars at top and all the equipment needed for each race.

The two primary working areas get hot very quickly. Inside the transporter, Jim Dunn (affectionately known by all as Big Jim) himself is the one working on the pistons and rods. The space is cramped, and air circulation is hard to come by. To make the

most of the open transporter door, he positions a Portacool Jetstream sitting under the awning to blow cool air directly into the doorway into the path of his work station. This is key to keeping him focused when the heat becomes unbearable.

Outside, the crew personnel will work under the awning around the hot engine with little cooling. Jeremy Norman, a crew pit member for seven years, says that the head pipes they pull are super-hot and can create a very hot environment. “The gear itself is hot, but then we have the issue of the huge transporters parked so close together that any natural breeze there may be is blocked,” he said. “Having a source of cool air from the Portacool blowing on us keeps us from sweating to death.”

Ultimately, after each race, the team’s Funny Car gets a rebuilt motor, new pistons and rods, and fresh cylinder heads. Combined, it is a team effort and keeping at peak performance is key to ensure there are no mistakes. Time is of the essence so there is no time for anyone to slow down.

“The mobility of the Portacool Jetstream 220 makes a huge difference for us because we can roll it exactly where we need it to keep cool and stay focused on our work at hand,” Jeremy said.

The evaporative cooler even gets used when the team is back at the home shop in southern California. According to Jeremy they gladly take the 15° temperature drop they get in the shop or in the transporter they typically achieve by using their Portacool evaporative coolers. When in a competitive racing business, every little bit counts toward building a win!