The Shreveport Fire Department serves a community of almost 200,000 citizens in northwest Louisiana. The department includes 22 fire stations and an expansive fleet of vehicles serviced and maintained by the Fire Maintenance Facility. There, a team of Emergency Vehicle Technicians (EVTs) work on all of the equipment deployed in the fire department including:

The EVTs often find themselves working in tight spaces on the various engines. They utilize Portacool portable evaporative

coolers to ensure the comfort of their technicians who need to maintain their cool and focus while working to repair the vehicles in the shop. EVTs also use Portacool evaporative cooling when conducting pump-tests on the trucks, which entails standing behind a scorching engine surrounded by metal surfacing while checking the psi capacity of the pumps.

“These coolers are lifesavers in the summer,” says Randy McCollum, an EVT who has been on the team for 11 years. 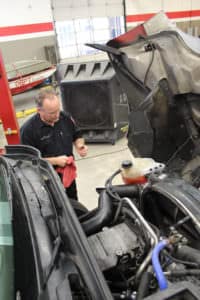 “Working on large trucks and vehicles typically means blocked airflow, but we can move the Portacool evaporative coolers around so we can get real relief from the heat.”

The portable evaporative coolers are also used for community events such as the state legislation’s annual Southern Gentleman’s Cookoff held in early June each year.

“We won’t go without the Portacool,” says EVT, Tray Watson. “We have people come up at the event just wanting a break from the heat. It makes a big difference.”