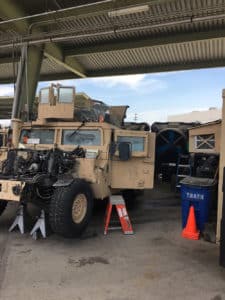 Military – Heat Affects Those Who Sacrifice for Our Country

May is National Military Appreciation Month as declared by Congress back in 1999. It is a time for all of us to observe and honor the sacrifices of the United States Armed Forces – both those currently serving and those who have served. Among their sacrifices of comfort, one condition that has begun to disproportionately affect our service men and women is the negative impact of heat which includes heat-related illnesses such as exertional heat stroke (or EHS).

According to Health.Mil, the official website of the Military Health System, the impact of heat illness is significant. The site states, “Heat illnesses can degrade U.S. military effectiveness by causing considerable morbidity, particularly during training of recruits and of soldiers and those in combat arms specialties.”

The rise in temperatures is becoming an issue domestically and across the world where service personnel are stationed. Recent reports show the annual rate of incident heat strokes among those serving sharply rose between 2014 and 2018. Further, it is important to recognize the recorded heat incidents did not occur only in typically hot regions across the globe like those in the Middle East or Africa. As noted by an article on Military.com, “according to the Defense Health Agency, 40% of the heat-related illnesses and deaths since 2014 occurred at five locations: Fort Benning in Georgia, Fort Bragg in North Carolina, Fort Campbell in Kentucky, Fort Polk in Louisiana and Camp Lejeune, a Marine Corps installation in North Carolina. Two of the others in the top 10 are in South Carolina.”

Many of the military guides for the various arms of service point to a HEAT acronym to build their education.

A – Acclimatization (and other individual risk factors)

T – Time of exposure (should include nights and recovery)

From posters to hip pocket guides, the educational materials highlight a myriad of individual risk factors that also effect heat safety among military personnel. The primary risk factor listed is NOT being acclimated to heat. The directive is to allow 10-14 days to adequately acclimate new trainees. The second risk factor lists increased heat exposure over 2-3 days with increased exertion levels and lack of quality sleep. Thereafter,

it is noted that risk potential goes up if you have used alcohol in the previous 24 hours or taken any allergy or cold remedies. They also list risks to be cognizant of when assessing heat vulnerability. These risks include being overweight, over 40 years old, having a prior history of heat illness or a skin disorder or sunburn that could prevent effective sweating. Materials reviewing this information can be found on each branch of the Armed Forces websites, as well as at health.mil. Each highlight the importance of the subject.

We at Portacool are thankful to our military for their hard work and dedication to their assignments. We’ve witnessed countless heat exposures induced by mother nature that pose risks to the health and wellness of those who serve. We appreciate the increased focus by leadership to educate and garner awareness for how to identify and prevent potential heat illness risks. Where appropriate, we’ve also supported a broad array of military efforts with our portable evaporative cooling solutions. We look forward to continuing to help with practical cooling solutions to ensure the safety of those who are sacrificing so much to keep our country protected.