Matt Blommel is known for his motorsport expertise. Since 2005, he developed a hobby into a full-fledged business that has flourished – Blommel Motorsports. He is renowned by motorcycle enthusiasts for his suspension work on the most popular motorcycles, including Honda, Yamaha and Kawasaki. You name the bike and he’s most likely worked on it. He stays busy working with as many as 60 customers a week, with more than 75% of the work shipped to his shop from across the United States. Motorcycle manufacturers, who have come to trust Matt as a valuable resource, often hire him to consult on their new products. 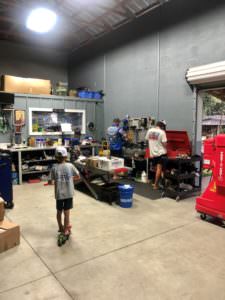 Meanwhile, his base business continues to grow as he has expanded to dirt bikes, ATVs, UTVs and other recreational vehicles.

In addition to knowing motorsport suspensions, Matt is also very familiar with heat, humidity and uncomfortable working conditions. He conducts all his work from his garage in Dade City, Florida – about 20 minutes north of Tampa. After a long day at work at his ‘day job,’ he comes home and enjoys a bit of time with his family before hitting the garage to work his magic.

“Prior to 2016, when I’d start working in the shop I’d built behind the house, I was miserable,” says Matt. “It would be 90+ degrees in the evening and my hat and shirt would be drenched from excessive sweat. It was hard to focus or get my work at the bench done quickly.”

Then, in 2016, a Snap-On rep came by and mentioned that he thought a Portacool portable evaporative cooler could make a huge difference in the 1,600-square-foot shop with 16’ high walls and little insulation. Matt says he was skeptical, but willing to give it a try given the extreme indoor heat he was facing. He hasn’t looked back since purchasing the Vertical Tank* model.

“What a difference the Portacool makes!” Matt says. “I open the garage doors, flip on the Portacool and go hang with the family for a bit and come back out to find a comfortable 80-83 degrees to begin my work.” 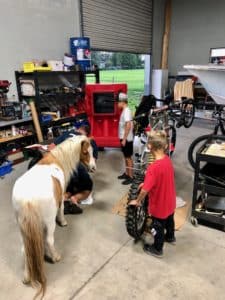 Matt notes that his friends were surprised that he bought the Portacool because they believed that it was an old school swamp cooler that wouldn’t work in the humidity. Matt enjoys proving them wrong by touting the temperature drop he achieves as noted on his shop thermometer and by his arguably drier shirt and hat.

The Portacool has become a favorite of friends and family alike. “We roll it where we need it for family gatherings. We love putting it on our 17×32 covered deck and entertaining with the cool air blowing.” In fact, Matt’s father, a fourth-generation farmer, bought a Portacool for his own operation after feeling the difference it made in Matt’s shop.

Last, but certainly not least, is Titan – the family’s miniature horse. Matt says he’s a major fan of the Portacool. “He hears the Portacool come on, and makes a bee line straight to it. Titan loves it, and believe it or not, we never led him to it. He found the cooling all on his own.”

*The Portacool Three Speed Vertical Tank (pictured above) is a discontinued model. Check out the Portacool Jetstream 240 or Portacool Cyclone 140 for a similar size.