As the global leader in evaporative cooling technologies, Portacool, LLC is constantly driven by innovation. The company’s expansive lineup of portable evaporative coolers is designed to help everyone – from manufacturing and warehouse workers to auto mechanics and hobbyists – stay cool and comfortable while focusing on what they need to get done. In fact, maintaining a cool environment not only safeguards against the health risks of excessive heat, it contributes to mental clarity and focus that translates to overall productivity. Portacool, as a manufacturer, knows this challenge all too well. Keeping the East Texas-based plant as productive as possible to keep up with demand is imperative. Portacool has faced its own cooling and productivity challenges to produce thousands of cooling products a year and is constantly driving towards even higher levels. 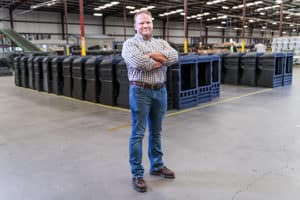 coolers to boxing and prepping each product to ship. The assembly area of the plant is based in a non-insulated metal building that spans 200,000 square feet. Given the brutal heat in Center, Texas (near the Louisiana border), the inside of the large facility can often be hotter than the outdoor temperatures. Terry describes it as “basically working in a tin can.” While employees are provided with water and electrolyte drinks and maintain carefully scheduled breaks during their shift, cooling measures are a high-priority to help the team work efficiently, at a highly productive rate and, most importantly, safely.

Terry and the Portacool team practice what the company preaches and use Portacool’s own products to keep productivity up in the heat. Terry intensely evaluated the key areas where portable cooling could be used to maximize productivity and effectively improve the working area. Scattered along the assembly lines are 36 Portacool portable evaporative coolers of different models and sizes.

“We sell our products to help people who work in hot, hard-to-cool environments stay safe and productive,” Terry said. “What better depiction of that situation than right here in our Portacool plant? If I can keep my employees working comfortably, they can keep production up.”

In fact, the cooling relief these coolers provide is so crucial to the operation at Portacool that Terry considers them to be part of his employees’ personal protective equipment (PPE).

Upon ensuring his employees are adequately cool, Terry took additional steps to enhance productivity by empowering the team to invest pride in their workspace and the area around them. He wants each of the team members to have ownership over what they are working on so they want to put their energy and effort into the task at hand.

He also wants them to have ownership over their environment. Which is why he helped drive the company’s implementation of a 5S program back in 2016. Portacool lightened the walls from their dark, dull color and installed skylights to brighten up the plant. Employees are responsible for cleaning and maintaining their areas, which has actually resulted in them appreciating their workspace more.

“The plant transformation has been incredible. We even have employees that want to bring their families to see where they work,” Terry proudly states.

The culmination of these practices aren’t just theories on how to stay productive; they’ve actually made a difference at Portacool. Since Terry took over the manufacturing department almost three years ago, production has increased by more than 30,000 pieces per year, and with his leadership and proactive planning, Portacool hopes to continue on that path of producing more portable evaporative coolers to keep even more people around the world cool, comfortable, safe and productive in their own work.